Westerville North will host Westerville Central Friday night to take on the Warhawks in an OCC Buckeye Division contest.  Also on the line will be the Curt Jackowski “Throwdown Across Maxtown” Trophy.  This will be the 6th installment of the contest.  Central won last year’s battle 48-12 so the Warriors will be ready to take the trophy this year.

The trophy is named in honor of the late Curt Jackowski who passed away in July 2014.  Jackowski served  Westerville City Schools as the Executive Director of Human Resources and, more directly to the students and community, as the principal of Westerville North and president of the football booster club of Westerville Central.  His influence and dedication to Central and North was impressive and will not soon be forgotten.  Curt coined the term “Throwdown Across Maxtown” during his tenure at Westerville North –  naming the road that divides the attendance area between the schools…however, everything Curt did was to bring the schools and community together.  The trophy (pictured below) was designed and built by Jim Lytle – a great friend of Curt’s who served as an Assistant Principal at both Central and North –   and has a genuine Maxtown Road sign and an actual piece of Maxtown Road.

Curt’s wife Val and their kids Grant, Morgan, Nate along with granddaughters Emberlynn and Dailynn will be on hand for a post game ceremony to present the Jackowski Trophy to the winning team. 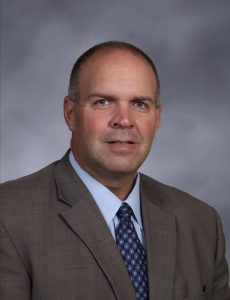 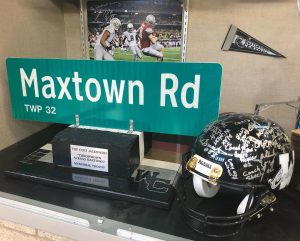