The Westerville North bowling teams have been in action over the past week.  On Friday, both the boys and girls teams competed versus Westerville Central High School at the Columbus Bowling Palace and then were back in action against Grandview Heights on Monday afternoon. 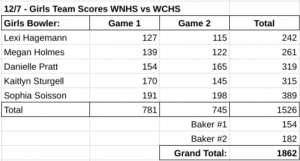 The boys team fell to the Central by a score of 2302 to 1722. Leading the Warriors was senior Jason Sturgell who bowled games of 175 and 188. Also bowling for the Warriors this year are Alex Sarakinakis, Ethan Moore, Will Mueller, and Jon Pratt. Individual scores for the Warriors can be  found at right. 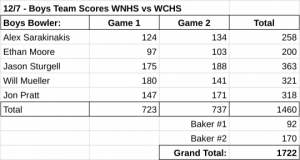 The lady Warriors also fell to the lady Warhawks by a score of 1915 to 1862. Competing for Westerville North in the match were Lexi Hagemann, Megan Holmes, Danielle Pratt, Kaitlyn Sturgell, and Sophia Soisson. Soisson scored highest for the Warriors in the contest bowling games of 191 and 198. 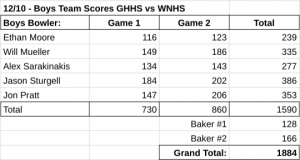 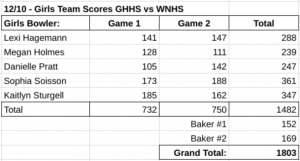 The next match for the Warriors will be on Thursday, December 13th versus Olentangy Liberty High School. The match starts at 4:00PM and will take place at Sawmill Lanes in Dublin. Come out and support your Warrior bowlers!